Despite my best intentions, sleep was an elusive beast this weekend – contrary to my wishes. Friday night the BSD had another seizure, at 1am, so I had to do the whole bucket-and-mop routine. Needless to say I suffered to go back to sleep afterward. Saturday was not much better. I had neighbourhood watch. 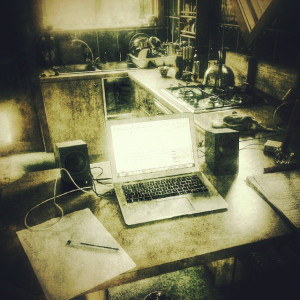 We saw action with our patrol within the first five minutes when we encountered a bin picker. Which in itself is not strange for South Africa – on garbage collection day. But, hello, this was midnight on a Saturday/Sunday. We ended up tailing the guy, who resolutely picked his way through bins until the cops came to collect him. Life in South Africa. I often feel like we're under seige.

The husband thing and I watched the second-last disc in The Lord of the Rings boxed set. So many years now and those films are still beautiful and stirring.

Other than that, the weekend was spent mostly editing, writing and reading, intersersed with enough vegetation and socialising. A good balance without me feeling as though I'm being run ragged. And so I face the upcoming week, feeling marginally better about things.

Oh, and I planted a tree. One of those little ficus trees you can buy that if you try to grow them indoors they eventually turn yellow, lose their leaves and die. I had this one in a pot for a number of years and I could tell he wasn't happy. So, off he goes, released into the wilds of the Treehaus garden where a bougainvillea died.
Collapse