So we went out on Friday. Which means I actually had to put on proper makeup and wore jeans out socially for the first time in dog knows how many years. We went to the Mercury in town to see two bands that friends of mine are in. One was Terminatryx and the other was Subvers. Both most excellent, even if the guitars overpowered the vocals on both counts. Funny to know that next year it's going to be me up on stage, but jawellnofine, I'm trying not to think about live performance too hard.

Saturday I woke up feeling like I'd smoked 40 cigarettes. Considering that I no longer smoke, this was seriously shitty for me. I've also come to realise that half the problem with hangovers was most likely the fact that in the past I used to inhale so much secondhand cigarette smoke. Despite the fact that allegedly there's legislation banning smoking in venues, this evidently hasn't filtered through to Cape Town's nightlife. Hence another reason why I'm not in a hurry to go out again. 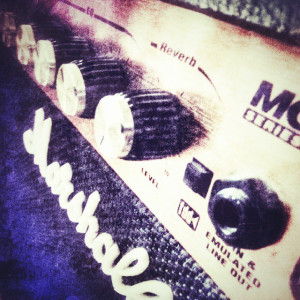 So anyhoo, the next bit of fun times is that I now have a halfway decent amp. I bought a 10W Marshall amp from a mate of mine who's buggering off to the States. Got to play with my new toy last night and I can't believe I lasted all this time with the shitty little amp that I'd had up until now. I'm not looking back.

Spent most of today stuck in developmental edits for a novel I'm working of for a local publisher. This is the third round and I'm satisfied that I've done the best that I can do with the author. It's not been easy, but then again, developmental edits are not for the faint of heart. But they are very rewarding when things start pulling together. I'm also over the dog's back with edits for SSDA. Now *that's* been a helluva ride. I've also gotten my teeth back with regard to editing, so a big thank you to Rachel Zadok for having the confidence in my ability.

And I've been listening to a lot of dark ambient of late. Particularly from the Cryo Chamber label. This is what's playing now.
Collapse